1. There’s one well for every 10 people living in Alberta.

Alberta is absolutely covered with oil and gas wells.  More than 450,000 wells have been drilled in the province, reaching from rural and Indigenous communities right into the heart of its biggest cities.

Once oil and gas companies are finished actively producing from a well, they are legally required to clean, cap, and “reclaim” them.  The problem is, they’re not doing that.  As these wells degrade, they leak toxins into the land, air and water.

2. The cleanup bill for these wells is greater than the value of the entire oil and gas industry.

How is that possible?  Let’s break it down.  Over 330,000 wells in Alberta either need to be cleaned up right now or in the coming years.  “Full cycle” reclamation cost can range from $100,000, up to millions of dollars for a really difficult well. When you do the math, cleaning up Alberta’s oil and gas wells could cost up to a hundred billion dollars.

And here’s where things get really scary.  When you put the full cost cleanup liabilities onto the books, the vast majority of Alberta’s oil and gas companies are already insolvent — and have been for some time.

In other words: if Alberta’s oil and gas industry had to account for its cleanup costs, it would already be out of business.

And if oil and gas companies aren’t setting aside the money to clean up their own mess, just who is going to pay for it?

You guessed it: the rest of us.

3. Alberta’s oil and gas companies have figured out how to pull off  “bankruptcy-for-profit” — and it’s the scheme of the century.

In Alberta, conventional oil and gas companies have been staving off bankruptcy by taking on massive debts, and running a $32 billion deficit from 2009-15.  This reckless approach to business is only possible because of the Alberta government’s lax approach to industry regulation. 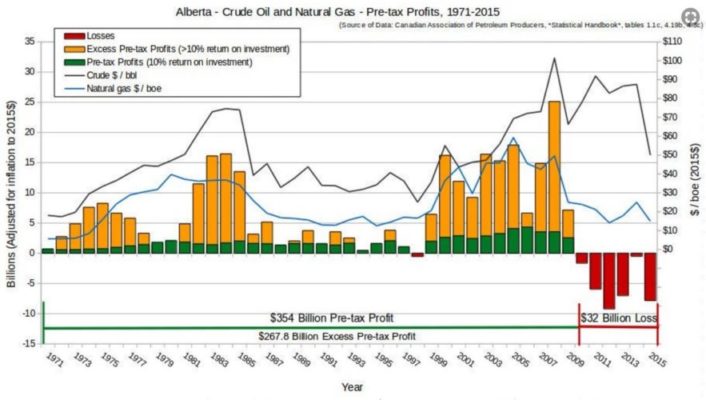 Just how corporate-friendly is the regulation? To start off, well owners have almost  no hard deadlines for well cleanup.   So companies that would be broke if their cleanup costs were on the books continue to operate.  They’re taking on more and more debt, knowing they can put off their environmental obligations indefinitely.

That is, until they implode into bankruptcy, selling off their assets to pay back creditors, while leaving a toxic legacy behind. It’s bankruptcy-for-profit.  And the stakes for the rest of us could not be higher, because…

4. An upcoming Supreme Court case could leave all of us on the hook for industry cleanups across the country.

The legal battle around a company called “Redwater Energy Corporation” is the most important court case you’ve never heard of.  In May 2016, an Alberta court decision allowed Redwater to walk away from its legal duty to abandon and reclaim its old wells — and let it pay off its creditors first instead.

The case is currently being appealed to Canada’s Supreme Court.

So what does it all mean?  If this precedent holds, it means that every industry across the country can walk away from its environmental liabilities. Every pulp mill, mine, or power plant across the county can be run into the ground, while executives and shareholders walk away with the profits, and leave all of us with the cleanup bill.

5. There’s a way to fix this.  And it could put Alberta back to work and spark a reclamation boom. 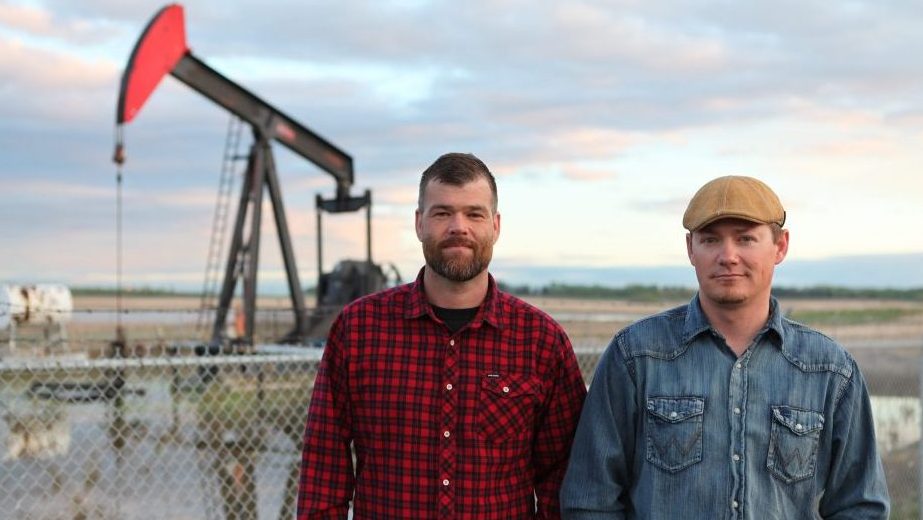 Brent Nimeck and Regan Boychuk stand in front of an abandoned well, 2017.

What if we could make sure the industry pays its cleanup bill now — AND put tens of thousands back to work in the process?

Brent Nimeck and Regan Boychuk are Albertans who have been working in and researching the province’s oil and gas industries for decades.  They’ve come up with an innovative way to fix the problem of reclaiming these old wells before the industry walks away from them. The plan is called RAFT: Reclaiming Alberta’s Future Today.

The idea is simple: hold the oil companies to their legal obligation, and make them pay to clean up their mess. In Alberta, there are tens of thousands of unemployed oilfield workers and vast arrays of equipment ready to be put to work to clean up those wells.

Implementing RAFT would shift Alberta away from its reliance on fossil fuel production and launch a new reclamation boom in Alberta –– a model that could be exported to energy jurisdictions around the world.

Healing the land through reclamation can also begin to rebalance the scales of justice with Indigenous communities in the province. One hundred years of oil and gas exploration in Alberta have poisoned the land, water and air, undermined the treaties, and now threaten to leave all of us with this toxic mess and the cleanup costs.

But getting oil and gas companies to clean up their mess could be the start of a green jobs boom, and a new future for Alberta.

So let’s get to work. Sign our petition to hold oil and gas companies accountable.